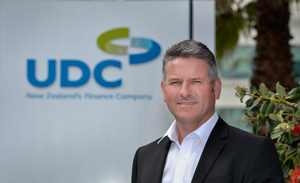 UDC Finance has posted a record net profit after tax of $61.6 million for the year to 30 September 2017, a 5% increase on the previous financial year.

“UDC has delivered another very good result, reflecting growth in our loan portfolio across a range of industries, continued improvement in credit quality and careful management of costs,” said UDC CEO Wayne Percival.

“Continued strength of the economy has seen record new car sales, healthy investment in new equipment in agriculture, forestry, construction and business services. Our focus remains on our core business of financing these requirements and understanding the needs of our customers.

“This momentum has continued, with UDC’s loan book passing $3 billion at the start of November.”

Revenue increased $3.6 million (+3%) from FY16. Underlying revenue growth from lending has been even stronger, but this was offset by a number of headwinds, including cost of funds, lower prepayment revenue and lower fee income.

Costs remained under control, increasing only 3% during the year. Increased efficiencies have resulted in cost-to-income reducing to 26.1%.

Provisioned expenses of $5.9 million is a decrease of $1.5 million (-20%) on FY16. The overall quality of the lending book remains strong and there have been no individually significant write-offs in the period.

At $1.039 billion, debenture funding remains an important part of the funding mix but has declined by 35% from the prior year.

ANZ has increased the level of funding support with the limit on the facility increased to $2.7 billion effective from 13 November 2017.


UDC Finance is a wholly owned subsidiary of ANZ Bank New Zealand Limited, and has a Standard & Poor’s* credit rating of BBB/A-2
*Credit ratings issued by Standard & Poor’s Ratings Services are solely statements of opinion and not statements of fact or recommendation to purchase, hold or sell any securities or make any other investments decisions. Latest ratings can be found at www.standardandpoors.com